It so happened that we got two ‘theatrical cases’ today. Two different mornings with adventure-therapeutic value. The first one is written by me, the second is written by Peti who played Felix’s role. Bon appetite! 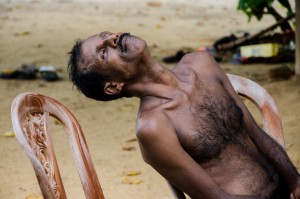 Since the mentor’s discussion starts at 8 every morning, Lóci and I, just as every morning, run to the shore at 7:15 to hide our shoes between the bushes and run barefoot through the sand and the bays. We’re passing by the rocks stretching throughout the beach so we necessarily have to wade through the waves. We have to figure out before going back to Hungary how to take the ocean home. But for now… we’re rolling the bandage taken from home around Lóci’s eye. When we get back from running, we’re going to tell the children that I beat up Lóci because they went at each other with Felix yesterday while playing cards. It started the usual way (with a fart), then came an unjust slap in the face (not that I think there’s the possibility of a just smack in the face) and than something snapped in Felix. He went at Lóci who held him down, embraced him and told him to cool down, we love each other so we should talk it over. Then it fell silent, the game continued – still we wanted to show them where violence and these aggressive, uncontrolled, sudden outbursts can lead to. With a twist, the female character being hostile, so we could give a slap to that macho attitude too.

The children completely froze at the breakfast when they saw the – otherwise clumsy, turban-like – bandage over Lóci’s head and one eye and came to know that we got into a fight. This was our first quiet breakfast. We hardly talked, everyone improvised. Than the group session took place with the exemplary acting of Pali, first talking to the mentored, then the mentors, explaining that now we absolutely crossed every line. Dismay followed as Pali unveiled the situation and Lóci unrolled his turban. The end result was great relief, deducting the morals and a few surprised congratulations for the performances.

The agreement was that if Felix won’t quit with his gangster-parody, constantly taking offense and aggressively attacking others, than Peti will impersonate Felix for half a day so that Felix can observe from the outside what he’s really doing. Unfortunately – or to the joy of some of us being very excited about the performance – it took place. Here is Peti’s report on what happened.

I had to prepare to it like an actual performance. The most important is to be credible so he can see what he is really like. I gathered the all the specific, everyday Felix-moments and the memorable dramas that happened to/by him during the one month here. It had to be toppled by his language and his movements. The mentors and Pali helped so I won’t leave out anything. We were done with rehearsals the previous night.

I still had some time in the morning to think everything through and think about the possible outcomes. I had two ours for “Felixing” to myself before the children woke up. Then I waited for everyone to get settled in the theatre (everyone went to the kitchen for breakfast) and the performance begins. Entrée: starchy walk, flexing muscles with a little swinging in the upper body, scanning faces.

First act. Getting my plate full of pastry, an amount I definitely won’t be able to consume and start gorging. Post factum I have to say this was the most difficult task by far. But if Feilx always tries to eat as much as possible, I also have to. If they couldn’t realize by my entrée that my performance has begun, they know by now.

Second act. Pali and the mentors are brilliantly supporting me with the character, I just have to react to what they do or say. They ask me why I get so much food – I take offense. ‘Why do you take offense, silly?’ they ask. ‘Your mother’s silly, you moron.’ Bori’s trying to calm me down, I tell her to f+ck off. Lóci is a bit more vigorous. ‘I ain’t afraid of you, giraffe p+ssy!’ Kristóf says something. ‘Wanna fight?? I’ll break your jaw, sh+tface!’ Lóci stands over me, he’s constricting me in an embrace. I gasp, my muscles and strained, I shout ‘Let me go’, but he won’t. Slowly I calm down.

Third act. Kristóf tells me he is better at wakeboarding than me. ‘What are you smiling about, d+ckbreath? You’re not allowed to ride the motorcycle.’ Now Irén smacks at me. That reaches the limit for me. ‘You can’t do this to me! I ain’t afraid of you, I’m better than all of you! I could tear you all a new +sshole!’ I hit the wall then go to my room shouting where I’m flexing my muscles in front of the mirror for a while. I throw all my stuff into my suitcase and leave the house through the kitchen. They’re trying to cool me down, Pali comes to talk to me. I calm down.

Fourth act. Breakfast is over, the group session is starting. I sit in the chair which Felix made his only place to sit in the last month. Nobody has a fix place besides Pali, but Felix considers the chair next to Pali’s his own. Felix tells me it’s his place, but I won’t stand up. I wouldn’t have thought, but this is the climax for Felix. He gets pissed off, goes into his room, not willing to join the group session. Bori goes after him, nothing happens. Pali also goes, nothing. Then a few minutes pass, we manage to convince him, but we can tell we have to shut the play down. I exit the building with a clever excuse. By the time I get back, Felix is sitting at his place and I’m me again. The curtain drops.

It was not good. I really became him. Constantly full of tension, always ready to jump. I couldn’t let go for a second. It came clear how difficult must it be for this boy.