Gangster movie 2.0: Lord of the flies – the forever-changing system is set up 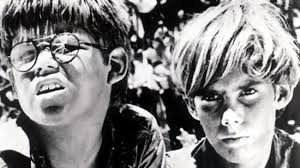 Basically the situation is that the ten of us are going to live together for two months. The four kids: one of them is quiet with anxiety issues, three of them on the other hand are incredibly active and loud, especially Benike (not his real name but a code name as in a true gangster movie. The children’s real names can’t be revealed – in their protection). Benike is sweet, has a brilliant sense of humor, cursing all the time using a great variety of expressions, topped with a redneck-like dialect. He uses the phrase ‘curve your mother’ on a daily basis. He is seven years old, hyperactive and has not one but two mentors. Namely every child in the program has a personalized therapy according to his/her individual needs. Benike is the first in the history of the program who has two mentors which seems justifiable as both of his mentors are one hundred percent occupied with the task of keeping up with him. I’m lucky with Benike. He is gentle with me more or less since his favorite fairy-tale hero’s name is also Bori. Thanks, mom. So here we are, five mentors and Pali, the psychologist, who is pretty loud himself sometimes.

After our initial difficulties we started to set up the system. We are completing charts about the chores and constructing timetables for the kid’s studies, sweating on the side of the pool, because they have to take exams when they get home. We discuss out who will teach which subject. I’m happy that I once was a major in Hugarian language in university – and I’ll also teach math. WOW.

The forenoon is for studying and we have mentor-mentored activities in the afternoon. That means we go somewhere exiting nearby in pairs of two, like the bay in Hikkaduwa where the turtles the size of a mill wheel live and we wait there until one of them comes out of the water. Because they do come out of the water in hope of some treats when they see the people standing on the shore. When we went there with Felix the turtle named Rozi came to us. Local people can distinguish the turtles based on I can’t imagine what. Never mind, the point is that we went to Rozi and we pet her and this experience really came in handy. After an abundant fight I can solely recommend petting turtles for everyone.

It’s also possible to go to Ambalangoda, which is an authentic local village. We can take a bus or a tuk-tuk (tuk-tuk is a local vehicle with three wheels, it’s kind of like a chariot with the handlebar borrowed from a bicycle. Three people can travel comfortably on the backseat behind the driver. It’s sides are open. It looks pretty funny and you can go fast with it which the local people often do). There is ocean, the tsunami museum, the HELP village, or one could just walk about and talk to the locals who are pretty open and speak English a little bit and love to ask ‘how are you’.

But before one would think that we are on a pleasant cultural holiday I have to state that’s not the case. Group sessions began, three of them a day (sometimes more, sometimes less, according to the situations emerging). We lack no group therapy considering we’re dealing with four really problematic children. I wouldn’t say you could feel the tension; instead anything can explode at any time, even at the most unexpected moments. Fortunately Pali is a master of improvisation, stirring up the hornet’s nest with spectacular and strong-handed dramaturgy, at the right moment. The boys are not always happy for these moments, thinking about their developing self-knowledge that could later help them accepting and loving themselves, meanwhile developing new solution-strategies for the problematic situations. Moreover, they sometimes use each other – or even more their mentors – to rid themselves of the tension.

As I’m writing this line, the others are watching ‘Lord of the flies’ by Peter Brook in the next room. The potentials of an island. Lóci (mentor) couldn’t take the aggression. Kata, one of the mentors of Benike takes him to his bed to sleep. Peti (mentor) is having a serious conversation with Felix. Kristóf is screaming like Jack in the movie. Sometimes it’s hard to differentiate between the sounds of the movie and the sound of our flesh-and-bone children as the text is falling apart amidst my fingers. We are tired.