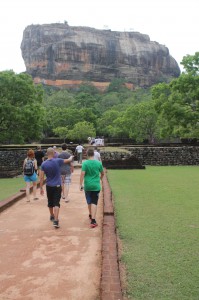 Walking in the garden of Sigiriya (Photo: István Kárpáti)

We’ve climbed up to the top of Sigiriya this weekend. It’s quite circumstantial to get to the rock since it’s in the middle of a jungle. The car was going in a slow pace, often on dirt roads. It took us seven hours to get there from Kahawa, so the night we’ve arrived we stayed in a hotel and climbed the rock the next morning.

Besides visiting the rock is a big experience for everybody, to me it was the most beautiful place I’ve ever seen. The rock is situated in the middle of a jungle-plain and you can see far-far away from the top of it. Around 500 AD, prince Kashyapa took over the rock from the Buddhist monks to build a palace on top, after killing his father and turning against his brother. He built a three-part garden in front of the rock, painted frescos on the flat surfaces and built a residence and swimming pool on the top for himself and his harem of several hundred women. After committing suicide, the heir to the throne gave the rock back to the Buddhists who lived there again until around the 13th century. After they’ve left, the rock became uninhabited. The reconstructions of the rock began in 1982 so that visitors could come. Sigiriya is in the middle of Sri Lanka’s ‘cultural triangle’ – three former capital cities form the circle specifying the past of the island – and is currently the most visited tourist sight on the island. We even ran into Hungarians. 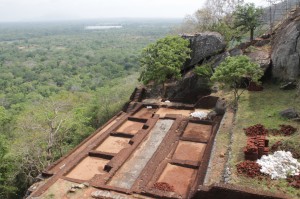 ruins on the top of Sigiriya (Photo: Bence B.)

Our weekdays were quiet this week. Miklós, who already extended his stay by two weeks is now extending with 9 more days which makes us very happy, especially because it’s great that Miklós feels so good with us. He would have even stayed more, the reason he isn’t is that the tourist season officially begins in Sri Lanka on the 26th of July causing plane ticket prices to soar. So Miklós is going home on the 25th. Significant part of our group (including Miklós) went up to Colombo for visa extension. Entering the country the visa only applies for a month, but many of us came for six weeks. This resulted in days at the start of the week when only four of the group were loitering around the house.

Unfortunately, some damage took place: a ping-pong racket has been broken. Nobody took responsibility for the damage despite Pali told us several times that he doesn’t want to punish, and if the perpetrator reveals his/her identity, it’s going to stay between Pali and the person. This kind of behavior (stealing or damaging) is in the past of nearly all of the mentored, so it has to be treated as a symptom, not as crime. Therefore no punishment can be assigned.

Nobody took responsibility even with these conditions, which resulted in considering everyone as participant in the damage. The weekdays seemed quiet in part because we’ve set aside the cost of the damage from the money we would have normally spent on the activities in the afternoon. We gave the collected money to the ‘financially harmed’. It was difficult not to go to the beach or to the pool because the temperature was very high all weekend, but the damager of the ping-pong racket turned up on Saturday and – according to the promise – Pali only told the group that the perpetrator confessed.

The Perehera went through our street, the Batapola road, on Sunday morning. Perehera is celebrated by every settlement, once a year. We were lucky enough to also see Hikkaduwa’s and also Kahawa’s Perehera. 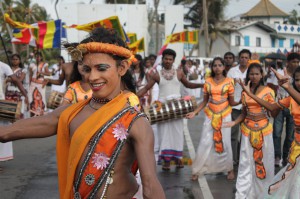 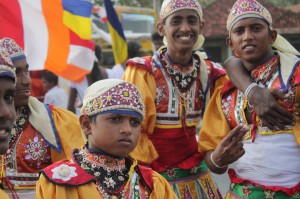 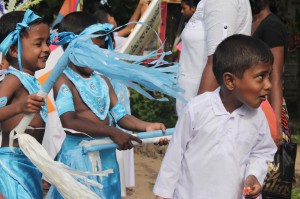