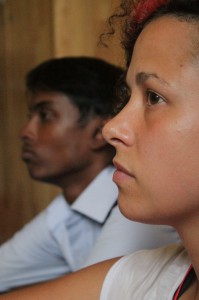 Gyöngyi and Barnabás (mentor and mentored) traveled home after one month of therapy. Their leave affected our group in the strangest way. We feel their absence in ways we wouldn’t have imagined. They were both important members of the group. Gyöngyi’s presence proved to be ‘normative’ in the first few weeks: her way of speaking to the kids, to affect them was exemplary. We, mentors, learned a lot from her, and she was big help for the mentored too. As of Barnabás, he was a leader between the mentored, they often adapted to him, he was also a leader considering the chores around the house. Through watching them as a team, one could really get a sense of what a great arranger Pali is – he forms great pairs. And now, with the leave-taking of two central figures, the internal relations of the group are rearranging.

When they left, something else came to light, which is although obvious, none of us though about consciously: the possibility of leaving from here. None of us thought about this, we just did our job, fully giving ourselves to the therapy. Some of us realized only at the moment of saying good-bye that two of us are leaving. It stroke everybody that this is going to end at some point. We formally, therapeutically said good-bye to them in our own way: we gave feedback to them about how they’ve changed, how they affected us. Despite of the conversations and farewell previous to their leave it only came clear what’s happening right before they left.

Gyöngyi sent a message to us after arriving home and her message is very important. She told us to cherish the things that happen to us right now, the fact that we get the possibility of being here in this situation. She said that only after arriving home will many of the things we’ve learned come clear and we’re going to miss many things that we’ve got used to during our stay in Sri Lanka.

The many things we’ve got from this program will not be there when we get home and only then we’ll realize how much we gave to each other. Gyöngyi says she has found a new home with us and now, in her physical home in Budapest, she feels odd after the month with all of us. Barnabás also sent us a sign of life: he started to work in their family business almost immediately. He consumes no alcohol and he broke all contact with the former company that got him into so much trouble. He misses Sri Lanka and wishes to return for the next turn in November. 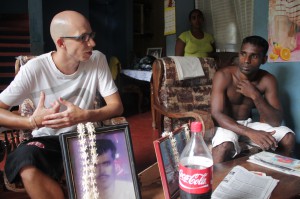 A visit to the HELP village (Photo: István Kárpáti)

Our project this week was to get to know the residents of the Help Village a little deeper. We’ve raffled which houses to go to in pairs to meet the residents and their stories. All of the inhabitants of Kahawa have personal experience about the monstrosities of the 2004 tsunami. Everybody has stories to tell and everybody lost relatives. During the week we’ve talked to them with the help of a translator. They’ve told us where they were when the catastrophe struck and many of them cried. Chami, our driver lost his fiancée, Dinuka, our translator lost his granddad and cousins, Krishante, who is from the Help Village lost his son and his daughter, and his father-in-law who was trying to protect the children from the water. Our world broadens with these stories. We can see the multicolored world surrounding us in greater detail. It is indeed a great opportunity for us.

Our weekend project is a trip to Sigiriya, a 200 meters tall rock decorated by frescos and statues, located in the inner part of Sri Lanka. The gardens and the statues surrounding the rock were built in the 5th century AD and was occupied by Buddhist monks for a long time before a king overran the place and built a fort out of it. We won’t get bored this weekend neither.