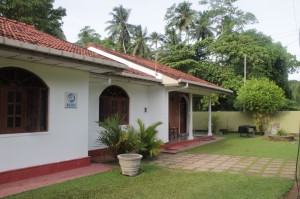 The house which we live in (Photo: István Kárpáti)

The reckoning with our time and efforts at the end of the first month out of three have gained a lot of good thoughts and observations for us. Sometimes Pali has to draw our attention on how much the kids changed because the beginning of the turn seems so far away – so much have happened since then. We have some long term mini-plans with the kids. We’re trying to rid one of the kids of the constant swearing by changing the swearwords to names of food. Anything goes – mac’n’cheese, beetroot, béchamel-cauliflower-chicken breast, you name it. Another guy is desperately trying to give an individual nickname for everyone. Now our group includes Gábor, Amanda, Sophie, Günther, Günther two, Missus Linda, Big Daddy, etc. One of us was sleeping in the daytime and turned awake at the nighttime back in Hungary – now he wakes at seven every morning all by himself. The anger management issues are also improving. After seeing the acceptance in us and the way we make fun of impatience and anger, their aggressiveness becomes powerless and useless. 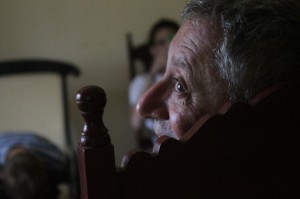 This of course doesn’t mean tensions wouldn’t rise from time to time. Sometimes our patients have to dig deep into the subconscious during their therapy and this process can bring pain as they have to face their true selves. Other times though things are going surprisingly well and it’s easy to cooperate. It seems as though the kids get scared that it isn’t so hard to do things that caused so much frustration and anger at home. They get scared about how easy it is to shape one’s personality, so they feel the urge to crawl back into their shells and do something stupid, or disobey and do a tantrum. Despite these dynamics, we have great achievements considering our collective work as mentored and mentors. It is hard to go through radical change together.

The structure of our days is estabilished by now: we wake at 6 AM, do the morning routine (including breakfast), then work from 7AM. We’re painting a local family’s house from the outside, and later, as time permits, we’ll work on other houses. If we wear down the house we live in, we’ll paint that too. 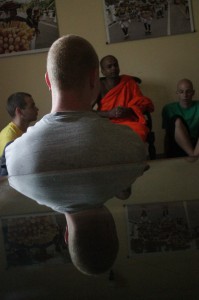 We work until 8:30, after that we have language classes – German and English – between 9 and 11. Between 11AM and 1PM, Pali is having therapy with the boys. Lunch at 1PM and then free time from 2 to 6PM when we possibly spend time in mentored-mentor pairs. David (my mentored) and me put our kung-fu lessons to the afternoon instead of the morning and sometimes we manage to get other people into our workout. If somebody decides to stay home, we have table tennis, a net for volleyball, board games, tools to make art, and some learn to play the guitar. It’s not mandatory to stay at home, obviously: we can go swim in the ocean, or we have our favorite pool next town in Hikkaduwa. We can go shopping, and surrounding towns and cities are full of sights to see: there’s a turtle farm, moon stone mine, tsunami memorial museum, lots of stupas (Buddhist places of worship) where one can go to meditate, and many other places to go to. We eat dinner at 7PM and at 21:30PM is bedtime. The life of the community livens up between dinner and bedtime: we play a local board game called ‘carrom’ (similar to snooker, but instead of balls there are pucks which you have to flick with your fingers) and we’re also fond of poker. Poker is a blood-serious game full of pathos and struggle.

I have to disprove one myth that got spread at home during our time in Sri Lanka: no, we’re not starving. Hopefully it’s just a misunderstanding. One new mentored and two mentors joined us on the 21st, equipped with several rods of salami, sausages and cheese, and the news that they’ve heard we’re starving. The exact opposite is true since Anikó, a mentor is a fantastic cook and prepares hot meals for lunch and dinner. She’s making home cooking, without local ingredients. We’re not starving, we’re spoiled.

As I’ve mentioned before, the composition of our group has changed. Between the 19th and 21st of June, we’ve split into groups and traveled to different cities. During this time we’ve said good-bye to a mentor, Iván, who was replaced by Márkó, and a new mentored-mentor couple, Domonkos and Noémi also came. We consist of 7 mentored, 6 mentors and Pál Vaskuti program leader psychologist. Anikó, the senior mentor is going home on the 1st of July. Her mentored, Miklós, who originally came for a month, decided to stay two more weeks, which is cause for happiness – also a great feedback. Another mentored who also came for one month also thinking of staying a bit more. This is how we set to work on in July.