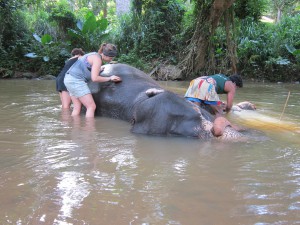 We’ve stopped at an elephant orphanage on the way home from Kandy. They take elephants into care who’s owner maltreated them. There lives 7-8 elephants on the property of the orphanage at the time. One elephant was washed in a river by his ‘mahout’ (elephant trainer/keeper) when we got there. The elephant leaned in the water sideways, then lifted his snout from the water to breathe only a few seconds later. Then the mahout invited us into the water to help him wash the back of the huge animal. We waded into the knee-high water with shells of coconuts in our hands. Since elephants can get scared of strangers getting too close to them, we always had to stand behind his back where he couldn’t see who’s washing him. We were scratching off the sweat on his back that got stuck to his skin. In the mean time, a monitor lizard swam away in the water near us and another elephant was coming into the river to get cooled down. 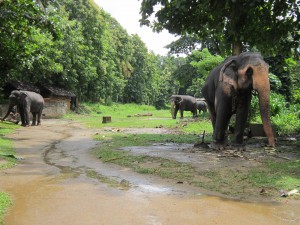 There are certainly plenty of experiences ahead of us, though so far this was the best opportunity to make direct contact with the environment surrounding us. We have seen many monitor lizards since we’ve arrived and I’m keep remembering the one I’ve seen in the Budapest Zoo, in a terrarium, behind a glass wall. The monitor lizard felt like something awfully far away from me, so seeing it behind glass in a zoo didn’t feel weird at all, but now, after seeing it hunting/relaxing/swimming in it’s natural habitat, it’s much more difficult to picture a monitor lizard caged up. The same applies to the elephant. It was laying In the water right in front of us – the largest terrestrial animal (well, actually the second one, after it’s African relative). It’s skin is incredibly hard and thick, it’s hair is like wire. The lifting of it’s stomach while breathing is frightening at first, we instinctively take a step back, thinking ‘what could we do against such a huge animal if it attacked us’? But it’s tame of course, just resting and enjoying that it’s back is not itching anymore. 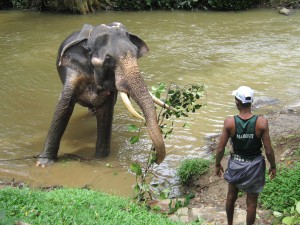 Barnabás (Gyöngyi’s mentored) came to Sri Lanka with the wish to get closer with animals if he gets the chance, and 4 of us decided to join him, so we’re soon going to come back here to the hillside to spend a few days taking care of elephants. Anybody can come here to volunteer. Volunteer duties are to wake the elephants in the morning, to wash them, to play with them, or one can work at the souvenir shop of the elephant shelter. Any amount of income is used to maintain the ranch. We’ve settled a date with the manager, so we’re going to be here from 19th to 21st of June.

After the short visit, we continued our trip home – about four hours were still ahead of us. We took a short stop at the SrI Lankan equivalent of KFC (Nadeeshan Food Corner), which is on the side of the dirt road and – obviously – only serves local food. A bit later a policeman pulled our car over and fined us for a thousand rupees for crossing the barrage line. According the law, Chami – our eternally nice and patient driver – has to pay the dues at the police station of the village he was passing through when fined. It means that he has to drive for three hours tomorrow to get back to the place, pay the fine, than drive back another three hours. Everyone of us chipped in for Chami, so we collected the amount of the fine and even money for petrol.