My mentored and I took off at 6:30 AM Sunday morning to conquer Kandy. The previous night we checked our possibilities considering trains and buses, but as it turned out, trains only stop at Kahawa in the afternoon, so we were left with bus as the only option. We played with the idea of going to the mountains bee line, but then we set on as everybody else in our group: along the coast to Colombo, than switch to a Colombo-Kandy bus. It is less creative or adventurous, but we might get there first. 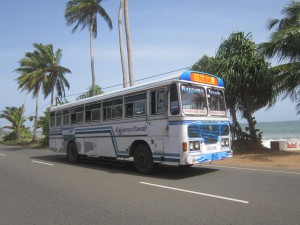 The bus stop is a kilometre from our base in Kahawa, we got there in 10 minutes on foot. It was a Galle-Colombo bus and it didn’t even fully stop at the bus stop, just slowed down so we had to jump on it. Local buses never close the doors of the bus along the way, and consist of mainly seats with one narrow corridor between them. We were standing in the crowd for a while and were going flat out to Colombo with basically no stops on the way. The usher took 300 rupees for both of us for the 3,5 hours long bus trip (about 1 US dollar each). There was a luggage rack above the seats, but instead of packages there were four massive speakers playing local music hits loudly (the usher was happily singing along the tunes). The Sri Lankan pop music includes well-known Indian instruments, but mixes them with the effects of modern pop music, so the consequences are several solos for each instrument and a fast, pulsating, colourful cavalcade of sounds. It was a minor culture shock, but we managed to cope with it. We were riding the bus, Sri Lankan pop as soundtrack, ocean on the left side, with doors open, going in the left lane. 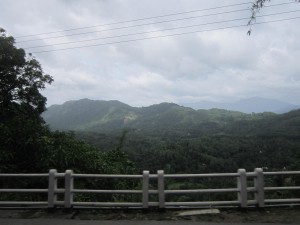 Landscape on the way to Kandy (Photo: Gyöngyi Herczeg)

Kandy is high up in the sierra. Not too large, a few hundred thousand people live there. It has a beautiful lake, a giant statue of Buddha watching the whole city, and also one of Buddha’s teeth is secured in Kandy. We were traveling for seven hours non-stop by the time we got there. It felt great to walk after standing and sitting for so long. We even ran for a while so we won’t miss out on the first place on the last few meters. There already were a few of our group in the hotel by the time we got there, but since we started from home with half hour differences, we weren’t disappointed. It turned out that everyone got there the same way. This meant that the time difference between each of us was often just a few minutes. We missed out on the third place by only one minute. After the announcements though, the rest of the group gave an amazing surprise: as everyone knows that my mentored is less rich than the rest of the mentored, so the top three winners of the race offered their prize for my mentored. After this inspiring moment, all we had left to do was to take a walk in the city, then a short play in the swimming pool, resting, and then going back home to Kahawa the next day. 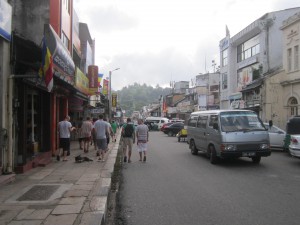 The boys on the streets of Kandy (Photo: Gyöngyi Herczeg)