Gangster movie 5.0 – My kingdom for a spitball!

We’re running through the garden in the dark with straws in our hands, with some tissue cut to small pieces and soaked in drool so we could spit it at Lóci or Kristóf through the straws. Meanwhile Benike touches my hand saying he wants in. ‘Well, ok’ I say, Benike is always very noisy though, we’ll definitely get caught. I hush him. And – marvel of marvels! – he’s perfectly sensing that the spitball war is dead-serious and stays quiet (yes, it’s the same kid who has not one but two mentors!). I run out of my three lives early ’cause I’m not very good at reloading – also I’m a bit disgusted of the spitballs I have to store in my mouth. Ok, we’ve lost the battle, but no problem, we just have to win the war – this is Pali’s saying, although he applies it to something (anything) else, but it is definitely true here. And, finally, Felix is behaving like a child and lets go completely! Hooray! Neither the well-behaved schoolboy nor the parody of a gangster can be found – only the child with the spitball. This was the goal. Win. 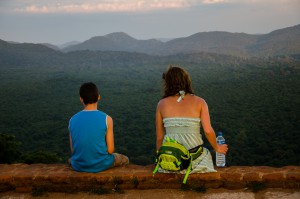 Our goal with Felix now is if we can get along well, we’ll take a few days trip, just the two of us, as Kristóf and Lóci went to Sigiriya earlier. Peti and Marci just went to the surf paradise Trincomalee (offseason, but still). Peti finally got the “senior task for the junior wizard”: to open up the world for Marci and open up Marci for the world. Pali asked the rest of us to write a list of 10 naughty things that Marci has to do on the trip by all means. Swim in a fountain, play music on a bus, solicit 5 girls, dance on a table. According to hearsay he already accomplished three of them, moreover one of them is a multi-point task.

There are big changes with Benike too. That time when Kata got majorly pissed off with him and Irén has just arrived back from the Maldives – she took a few days off to visit her nephew -, she broke the door of our common bathroom on Benike that he closed in on himself. When this happened, we realized we have to make change. Pali gathered the first ‘crisis staff’ of our trip. We just had to understand that this can’t continue. We have to look at Benike from a different angle. We can’t ask the impossible from him. It’s not our falut, Benike is currently not capable of putting himself into other people’s shoes, to imagine our feelings. We have to work with him with this knowledge. As we understood this, all the anger and frustration disappeared. Benike also got relieved after this and started to change in a nice, swift pace. The next day we built the empathy-developing puppet-show out of a slack line, blankets and towels while Benike and his mentors went for a one-day-trip to the elephant orphanage to test empathizing with others.

Yesterday we went to Jungle Beach, a magnificent place on a ness in the south of the island. From one side you can see the infinite ocean, from the other side you see the south-western corner of the island. In addition, the jungle starts right behind the restroom. We’ve spent a weirdly peaceful day and we were just about to leave. One needs to know that coming out of the water is the most critical process considering Benike. Sometimes it’s a hysterical procedure taking long hours to get him out. This day it so happened that Felix and Kristóf started screaming ‘We’re not leaving’! Then all the children and the adults joined the screaming one-by-one, resulting in a loud chorus of people screaming lustily for minutes, standing on the beach. Poor Benike was standing in the knee-high water, frightfully asking ‘you’re just joking and we’ll soon head home, right?’ Well… things change.

Might I add in parentheses that Kata and Lóci both defeated Pali in ‘pakett’. Parentheses closed.