We like to go on big trips together around the island. One of the many new things about this turn is that for the first time we didn’t plan one big trip since everyone have already seen the island. Instead we went on many ‘little trips’ with smaller groups to places none of us have been before.

First we went to the town of Kitulgala with Bella, Sergei, Marcus, Szilvi and me. Kitulgala is the place to try rafting and canyoning, and we also went to take a walk in a rainforest. My mentored, Sergei caused surprise: the silent, retracted boy wanted to be the first to conquer every obstacle and challenge and ended up acting like a second tour guide jumping, laughing loudly, screaming and – for the first time in his life – doing somersaults, jumping from a rock into the water which he then continued to practice. We agreed with Szilvi that we would have never imagined seeing this boy behaving so carefree after the long years being depressed, retracted into his room, socializing only through computer games. The three days trip and the amazing surroundings of the highlands enchanted us all.

Then leading mentor Anna went to Kandy joined by Lara and Marcus. We always include a day in Kandy during the big trips, but this was the first time some of us spent more than one days there. They’ve gained new friendships and got to know a truly different side of the former capital.

Finally, Bella and Lea went to Trincomalee with their mentors Szilvi and Réka. Trincomalee is a popular resort to be found on the eastern shores of the island where none of us have been before. The long and adventurous beared it’s fruit: Bella – known for her love of animals – got to swim with sharks, which is a brand new experience for her. 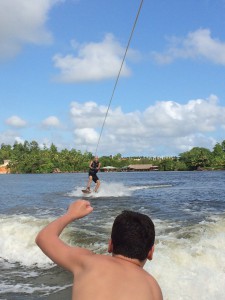 Before we’ve departed, my father surprised me with the news that they are coming to visit us along with my mother and my sister. They have spent 10 days in Sri Lanka, the first half with the group in Kahawa and then the four of us took a few days long trip. I was very happy that they could see how our work is done around here. Now they have an own Chance Program experience, they got to meet my colleges and our patients, our everyday lives. It was a huge surprise to see Sergei again after I’ve returned from the family trip. It just occurred to me how much he as changed during his time spent with us. He became smiley, lost a few pounds, the expression on his face is clearer and he became manly over all. It’s easier to recognize the changes after a few days spent separately: Pali had the same observations as me after he returned around the same days from an urgent trip back to Hungary. It is also a special feeling to recognize that the love and support is becoming mutual between the mentored and the mentor. When, after having spent two years in Sri Lanka, I’ve tried wakeboarding for the first time, Sergei – who also tried this extreme sport for the first time and had a blast and great success – gave me a great deal of support constantly waving and screaming instructions. Though not as fast as Sergei, I also managed to stand up on the board. Once again: Sergei spends all his free time at home, sitting in front of the computer.

Pali took the urgent trip to Hungary to consult with new candidates (we obviously don’t include anyone in the program before previous consultation) and the fruit of his trip was two new participants. Dorka, the youngest mentored in the story of the program, is 9 years old and she is diagnosed with Asperger’s syndrome. She came with her mentor Nóra.

Now the group consists of 18 people. We’ve expanded with two new guests: Zalán and Milán. Milán is an old friend for the bigger part of the group, Zalán, on the other hand, hasn’t met this turn’s people except for Pali, Anna and me. Zalán brought in a completely new color with his eccentric nature. He made a big impression on Eleonóra, mother of Sergei and Brigitta. We made a big break-through with her when we finally managed to get her to put all her mother-duties down and participate in the program without that part of her persona. She’s showing a completely new side of her, and they are paving the way towards a closer relationship with her daughter.

Despite his silent and inwards way of working on himself, Marcus’s huge efforts in the therapy are clearly sensible for everyone. He is eagerly waiting for the arrival of his family mid-July.

Lea told her life story again in this turn, which was a hard task for her even in the first turn because of the difficult nature of her memories. She unveiled new details about her story which expresses her openness towards us. The psychologists and us, the mentors are admiring her change, the change of a once drug-addicted, now four months sober Lea on her brand new path.

Lara and Gábor came close to each other very quickly and after the first few weeks they revealed their wish to go out with each other to the psychologists, which is authorized with certain conditions, since it is impossible to withhold these kinds of emotions. So, a new love is present in our community, which is a joy to see blooming.

We’ve made music-making an everyday part of our lives. We now have a large collection of musical instruments: we have a ukulele, a guitar, a cajon, a drum set, shakers, a djembe and a special kind of Sri Lankan drum, so that nearly everyone can get an instrument to make music collectively. The ones who don’t want to play an instrument can join in by singing or writing lyrics.