We’ve delayed packing until the morning of the departure with Gyöngyi, we’ll only need a few shorts, t-shirts, swimsuits etc. for the trip anyway. What increased the weight of our luggage was the several kilograms of chocolate and candy we took for the Sri Lankan kids. The fortune cookie at my last meal in Budapest said ‘you’ll acquire new friends in the near future’. I took it as a positive presage. At the airport we encountered a large group of photographers and journalists. The interest of the media accompanies us even here – the photographer for Marie Clare was also there, which magazine shoots images for their 4-page article on the program. Nobody got lost on the way and we were only a little bit mischievous on the plane, so let’s just take a big step in chronology: we’ve found ourselves in Sri Lanka.

Iván the kindergarten-teacher, believer of music therapy took a guitar, an accordion, two fifes and a zither to the trip which instruments will surely inspire everyone to make music together. Right after exiting the Colombo airport, a guitar and a djembe (courtesy of one of our children) turned up, causing a short, improvised musical performance by us. The next time the guitar came in especially handy was at the wakening in the morning: our shouting and howling of traditional Hungarian folk songs with the accompany of the guitar made the kids so angry that it prevented them from going back to sleep. Also, singing Hungarian folk songs in the middle of a Sri Lankan jungle was nothing but surreal. 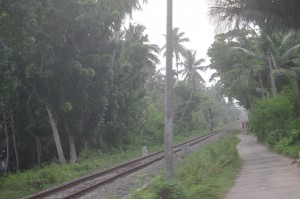 But the jungle was not our first impression of the island. The more than 11 hours long plane trip was followed by a four-hour car ride from Colombo to Kahawa – former meaning a trip of several thousand kilometers while latter just about 120. The car ride took so many hours because of the tuk-tuks along the way slowing us down and the crazy amount of rain falling as it was the second day of the monsoon season. It was the first time for almost all of us to encounter the romanticism of Sri Lanka and the patterns of the forever-stretching jungle interrupted by ruined houses. We’ve passed by a prison on the way to Kahawa. A sign on the prison’s wall read ‘prisoners are only humans’. We took our time in traffic jam, which led me to falling asleep. When I woke up, we were going fast on narrow, winding, sloping streets surrounded by many kinds of tropical plants of the jungle. We’ve arrived to our accommodation short after. Our building is close to the HELP village built by the donations of Hungarian people and also close to the Indian ocean, just a kilometer. After unloading our luggages, our first trip led us straight to the ocean which was new to many of us. 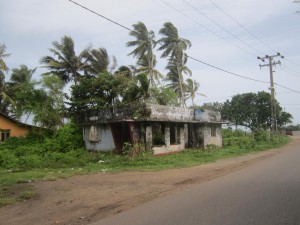 House left abandoned after the tsunami of 2004 (Photo: István Kárpáti)

I have some frame of reference since I’ve encountered several big waters in the world and if I try to compare, I can tell that the Indian ocean is especially furious, ceaselessly pounding the shore with it’s tremendous waves. There’s no peaceful coastline. Here, on the southern part of the island, if you take a look in the distance, you can only imagine the vast Indian ocean stretching way down until the Antarctica. It’s a desert of water, with the small exception of the tiny Maldives bulging in the seemingly endless ocean.

After the ocean is one of the main roads of the island, after the road are train tracks, which give another outlandish sight as the trains disappear into the jungle along the tracks. The tsunami of 2004 has destroyed most of the houses along the shore, but the ruins of some of them are still standing abandoned with walls torn open, overgrown with weeds, decorated with billboards, nine years after the tragedy, guarding the memory of it. Despite the exhausting trip and the vertiginous thoughts, the most memorable sight is the group – the kids turning their backs to the ruins of the shore, sitting in the sand, facing the ocean.