We went to Galle, the largest city of the island’s southern area. The destination of the one-hour van ride was a beach along the coastline that was chosen most beautiful on the planet by a well-known nature magazine a few years ago, but before getting there, we took a random stop when one of us spotted a group of fishermen pulling the fishing net to the shore. About 15 men was pulling the ropes with bare hands, but the net was still way inside the ocean, shepherding the fishes. We took photographs and decided to try to help the fishermen pull out the heavy weight (we managed to amuse a lot of Singhalese people with this). 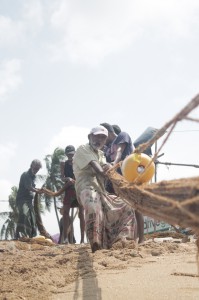 We were waiting patiently for the end of the fishing. It took about 45 minutes to fully pull out the net. As inexperienced fishermen, we first thought it was not a successful day for fishing since the major part of the net was already out of the water, but we haven’t seen the fish yet. Then the catch came: the net was widely stretched by the weight of the fish. The local people had a sense for the process: just a little before the catch was pulled to the ground, a smaller crowd formed a circle around the catch and started bidding on the price of the fish. There was also a significant amount of litter inside the net, plastic bottles and chocolate bar wraps, but the people didn’t bid on those. When we were traveling back the same road a few hours later, the remains of the catch was lying on pieces of clothings in front of men who were trying to sell them, and that’s when I’ve realized that the place we were at was the fish market, only the fish don’t travel as much as in Hungary between the place they catch them and the market.

The beach was indeed jaw-dropping. We sat down at a restaurant near the coastline and went inside the ocean (I’m usually not amused by big amounts of water, but even I couldn’t resist). 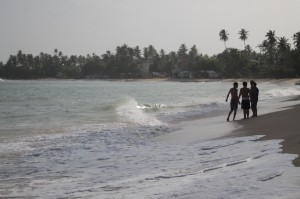 The ocean has got a frightening suction power. The water was getting slowly deeper until we got 5 meters in, and then the ground just disappeared from underneath. We didn’t go farther than this point because it wound have been dangerous, we just relaxed and let the currents drift us from the shore and back. The ocean was the most intense here. Every fifth or sixth wave was bigger than the ones before, so if we wanted a bigger experience, we would wait for those.

We planned a big surprise for the kids for the next day. We decided to end the process of getting to know each other and getting settled with a race intended to strengthen the relationship between the mentored and the mentors. The mission: to get from Kahawa to a specific hotel in Kandy (former capitol city in the mountainous middle of the island), going separately in pairs, using only public transportation. A guide will accompany each pair, but he/she will only intervene if the pairs get stuck and only his/her skills are possible to solve the situation. The kids got really excited by the plan. We handed out the maps, the necessary budget, and settled a prize that the three fastest paits get. After the race, we’ll spend the night in Kandy, and then the first week is already over.